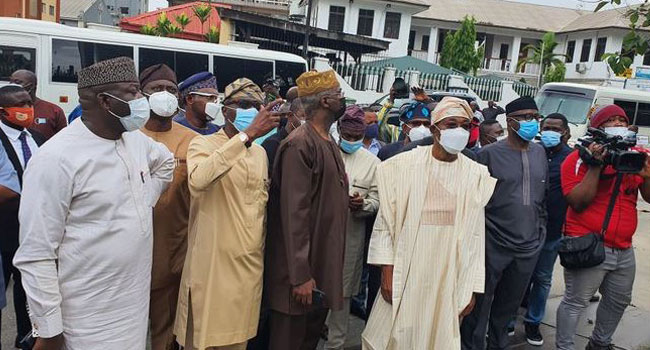 Some South West governors and ministers have arrived in Lagos State on a commiseration visit to Governor Babajide Sanwo-Olu following attacks by hoodlums on various private and state-owned facilities across the metropolis.

The governors and ministers on Sunday met with Governor Sanwo-Olu at the government house in Marina.

The ministers present said they were directed by the Federal Government to carry out an on the spot assessment tour on the damaged infrastructure, following the hijacking of the #EndSars protest.

As part of the tour, the entourage stopped over at the Nigerian Port Authority Office and the Lagos State DNA Forensic Centre that was set ablaze by hoodlums.

Flash: Former Governor of Osun State @raufaregbesola led opening prayers during the ongoing visit of the South West Governors and Federal Ministers' visit to Gov @jidesanwoolu over the recent incidents in Lagos. pic.twitter.com/2vdGu6FRiJ

Flash: South West Governors and Federal Ministers are in Lagos to commiserate with Gov @jidesanwoolu and Lagosians on the recent incidents in the State. pic.twitter.com/zEoZloPLVK

Lagos State Governor @jidesanwoolu taking South West Governors and Federal Ministers round some of the vandalised assets in Lagos. pic.twitter.com/ab6wXTXWmP

Former Governor of @followlasg @tundefashola inspecting the Lekki Toll Gate during the visit of South West Governors to Governor @jidesanwoolu over the recent tragic incident in the State pic.twitter.com/qamopc6RQ6