Osinbajo hails Burna Boy, Wizkid, says they are proof that Buhari administration is getting entertainment right

Vice President Yemi Osinbajo has saluted the Grammy wins of Burna Boy and Wizkid, stating that the Buhari administration has in the past few years introduced several initiatives to harness the abundant creative potentials in the country.

On March 14, 2021, Burna Boy took home the Grammy for ‘Best Global Music Album’ with his 2020 project Twice as Tall, while Wizkid’s win came courtesy of his feature on Beyonce’s ‘Brown Skin Girl’, which won the award for Best Video.

Referencing the success stories of Burna Boy and Wizkid, and saluting them for taking the entertainment industry by storm, Osinbajo says the environment has been prepared for Nigeria to produce more creative talents across the value chain in the industry.

“Burnaboy and Wizkid took the entertainment industry by storm by winning the Grammy Awards and established themselves as amongst the best musicians in the world.

“Burnaboy won in the “Best Global Music Album” category for the “Twice As Tall” Album and Wizkid; the real starboy, in the Best Music Video category for his feature in the song ‘Brown Skin Girl,” Osinbajo says in a message delivered at the opening of the Ogidi Studios – a Lagos-based world-class creative complex, hosting recording, film production, animation, and writing studios. 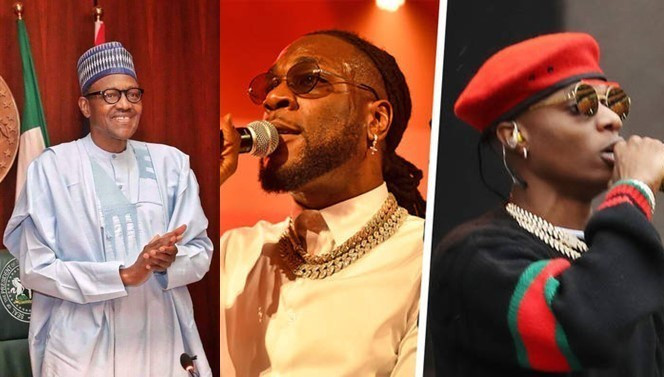 The vice president adds that in recognition of the strategic importance of the entertainment and creative sector in growing the Nigerian economy, the Buhari administration has in the past few years introduced several initiatives to harness the abundant potentials in the country.

“Last year, the federal government handed over the control of the national theatre to the Central Bank of Nigeria and the Bankers’ Committee.

“The Bankers’ Committee has committed to an investment of N25 billion as initial funding for the development of the Nigeria Creative Centre at the National Theatre, Lagos.

“The sector will receive support from the Central Bank of Nigeria’s creative industry funds initiative, an initiative that gives financial support to the technology and creative sector at single-digit interest rates.

“The Bank of Industry in collaboration with the National Council for Arts and Culture also has a N300 million loan package for the creative sector. The package provides the funds to the sector at single-digit interest rates with a tenor of four to five years,” Osinbajo says.

He adds that: “But perhaps more importantly, with the Ogidi Studios, Nigeria now operates on the same level of sound and video technology with the major global players. Now the stars, not just Nigerian stars, but from all over the world have a place in Lagos that is as good as any studio they have ever recorded in.

“World-class script writing, music recording, video making, and editing can take place under one roof, at the Ogidi Studios.

“The entire value chain in music and entertainment can now be local. So we are at the cusp of a revolution in entertainment production, creative talent and services, and a major economic opening for business in Nigeria.”