Lagos State Governor, Babajide Sanwo-Olu, yesterday, presented a report on the numerous property destroyed by hoodlums in the state during the #EndSARS protests to President Muhammadu Buhari at the Aso Rock Villa, with an appeal to the president to assist the state in its recovery process.

This is just as a Magistrate Court remanded six #EndSARS protesters that were arrested and arraigned in Abuja yesterday, following fresh demonstrations at the entrance of the National Assembly.
Meanwhile, Governor Sanwo-Olu declined to take questions from State House Correspondents on the reason he visited the president and on the state of affairs in Lagos.

However, the president stated the reason for the governor’s visit via tweets on his verified Twitter handle, @NGRPresident and this was confirmed by the governor’s aide,
“President @MBuhari this afternoon met with Governor @jidesanwoolu of Lagos. The Governor presented a Report on the extent of the destruction suffered by Lagos State in the aftermath of the #EndSARS protests. #AsoVillaToday,” the president tweeted.

Senior Special Assistant to Sanwo-Olu on New Media, Gawat Jubril, also tweeted, “Governor @jidesanwoolu, today (yesterday), presented the report of the recent coordinated arson in Lagos State to President Buhari at the Presidential Villa, Abuja. In the report were the images of public and private assets destroyed in the violence sparked by the hijack of #EndSARS protest.”
The governor had established the Lagos State Rebuilding Trust Fund and set up an eight-man Board to coordinate efforts to restore lost assets.

He said the trust fund would look into rebuilding the state after suspected hoodlums destroyed public and private facilities in the state.
In the heat of the protests, ministers from the South-west were directed to relocate to their home states to assist in dousing tension, and in their report presented to the Federal Executive Council (FEC), they recommended that the federal government should assist businesses affected by arson and looting in Lagos and in other parts of the country through the CBN and the National Economic Council (NEC).

They specifically recommended the use of the CBN Intervention Mechanism under the COVID-19 funding or any other related funding mechanism to assist victims of the arson attack across the country, beginning with Lagos State.

The renewed #EndSARS demonstration in Abuja yesterday led to the arrest of six protesters among those that converged on the entrance of the National Assembly in Abuja. They were arraigned by the police and remanded by a Magistrate Court.
The protesters, who gathered at the entrance of the National Assembly, were dispersed by the police, using tear gas and gunshots with six of them arrested.

The police arraigned them over criminal conspiracy, unlawful assembly, inciting public disturbance and public nuisance, but they pleaded not guilty to the charges.
A human rights lawyer, Tope Akinyode, who represented the accused persons, said the protesters were being held over “allegations of unlawful assembly and wanting to distort the societal peace.

“Of course, those are clearly trumped up charges because the protesters protested in accordance with the law.”
Akinyode said the magistrate refused to grant bail to the defendants when he moved an oral bail application, stating that the judge wanted the bail application done in writing.
Those arrested are Oluwatosin Adeniji, Paul Akinwumi, Davo Chom, Abdulsalam Zuberu and Kabiru Gasali.
In a video posted online, one of those affected, Adeniji said the matter had been adjourned till January 25, 2021.
Violence trailed the #EndSARS protest across the country, leading to loss of lives and destruction of property.

Also yesterday, the Borno State Governor, Babagana Zulum, warned promoters of the #EndSARS protests that the Boko Haram insurgency started with youths’ protests.
The governor, who gave the warning during an interview with State House correspondents, after his meeting with President Buhari at the Presidential Villa, Abuja, also warned youths taking part in the protest across the country to be careful.

On the unpredictability of the #EndSARS protests, Zulum, whose state has remained the epicenter of the activities of insurgents, said the Boko Haram crisis in the North Eastern part of the country started with protests by youths against the use of motorcycle helmets in the state capital, Maiduguri.

Warning against the protests turning into a disaster, Zulum noted that over one million people have been displaced as a result of Boko Haram activities, which were fallouts of the protests against the use of helmet.

The governor said, “On the issue of #EndSARS, I am calling on all Nigerians, especially the youths to be very careful. The whole Boko Haram saga started as a result of the protests by some youths in Maiduguri against the use of helmet by motorcycle riders. You have seen the situation now.

“Over one million people have been displaced and the most affected population are the vulnerable, the youth. Some of those that led the EndSARS protests have left Borno State; they are either staying in Abuja or Lagos or abroad. We have to be very careful.”

He said the #EndSARS protests did not take the dimension of Lagos State in his state because the youths were advised to examine the situation and recall the past, when the situation was so bad.

“Now, there is emerging peace in Borno State and we don’t want anybody to disrupt the peace. The youths are with us, we are taking very good care of them, palliatives are being distributed to them as and when due. We are giving them some financial support and I think the best way every Nigerian should seek for his/her right is through legitimate means. Otherwise, we are not going anywhere. Peace is very important,” he said.

He added: “The issues of transparency, good governance are very important. Whatever we are doing in Borno State, we are ensuring that the entire public is well involved. Fortunately, Borno State received the palliatives early enough and within two weeks of receiving them we had distributed to the deserving ones.

“Let me also use this opportunity to condemn police brutality in other parts of the nation; at the killings at Lekki Tollgate. But, I must also condemn the excesses of some of our Nigerian youths in taking the laws into their hands by destroying some of our infrastructure in attempt to support the legitimate demands of #EndSARS Protesters,”

Amnesty International yesterday alleged that the lives of his employees were in danger following its reports of the Lekki shootings of October 20, 2020.

Amnesty, in a statement yesterday, said some faceless groups issued threats to attack its workers and office premises.

It, therefore, called on the Nigerian authorities “to ensure the protection of lives and properties of every person in the country.”

The statement read, “Amnesty International draws the attention of the Nigerian authorities and the general public to the intimidation and outright threats of attacks that were issued against its staff, supporters, and premises by a faceless and unknown group at a press conference held on 4 November 2020.

“Similar faceless groups had previously invaded our office and given us ultimatum to leave Nigeria.

“Amnesty International is a global human rights movement and we are independent of any government. Our mandate is to hold authorities to account for their human right obligations and commitments. This, we have consistently done since June 1967 when we first started working in and on Nigeria.

“Every person whose rights are violated is entitled to an effective remedy. Exposing human rights violations and seeking redress for them is largely dependent on the degree of security enjoyed by civil society groups like Amnesty International.

“The Nigerian authorities owe a legal duty to ensure the protection of lives and properties of every person in the country. Malicious threats will not deter us from continuing to speak against human rights violations and abuses by state and non-state actors.”

Three #EndSARS protesters yesterday appeared before the Lagos Panel of Judicial Inquiry probing the October 20 shootings by soldiers at the Lekki toll gate in Lagos.

The protesters – Victoria Oniru, Dabira Ayuku, and Perpetual Kamsiyuchukwu – through their lawyer, Mr. Adesina Ogunlana, demanded to be granted audience.

Adesina told the retired Justice Doris Okuwobi-led panel that he would like to cross-examine Abayomi Omowuwa, the Managing Director of Lekki Concession Company, operator of the Lekki toll gate.

Though counsel for the Lagos State Government, Mr. Jelili Owonikoko (SAN), and LCC lawyer, Mr. Rotimi Seriki, earlier opposed Ogunlana’s appearance on the basis that “#EndSARS is not an entity known to the law,” they later withdrew their objection when Ogunlana called out his three clients.

“I am not representing spirits or ghosts. We’re here, to tell the truth. These are part of the people running underground, being threatened,” Ogunlana said in response to the objection by Owonikoko and Seriki.

Owonikoko had described #EndSARS as a nebulous entity with no structure or leader, questioning where Ogunlana got his instruction to appear before the panel.

Seriki, on his part, said since the LCC Managing Director was before the panel on subpoena, “he cannot be cross-examined by every Tom, Dick, and Harry.”

Following the withdrawal of the objection to Ogunlana’s appearing, Justice Okuwobi, in a ruling, admitted the protesters as a party and allowed their lawyer’s appearance.

The Managing Director of LCC, Omomuwa, had submitted the video footage on Tuesday.

The video has no sound and Omowuwa had told the panel that the surveillance camera stopped working at 8pm on October 20 when the incident happened.

According to the LCC MD, the footage was retrieved from the surveillance camera mounted by the firm on a mast at the tollgate.

Counsel for the Lagos State Government, Owonikoko, had suggested that the panel only view some portion of the footage to save time, but counsel for #EndSARS protesters, Adesina Ogunlana, insisted that the entire footage be viewed on the grounds that “we should not sacrifice quality for speed.”

But the retired Justice Doris Okuwobi-led panel ruled that the entire footage would be viewed.

The footage, which is currently being viewed, shows peaceful #EndSARS protesters at the toll gate on the night of October 20, 2020. 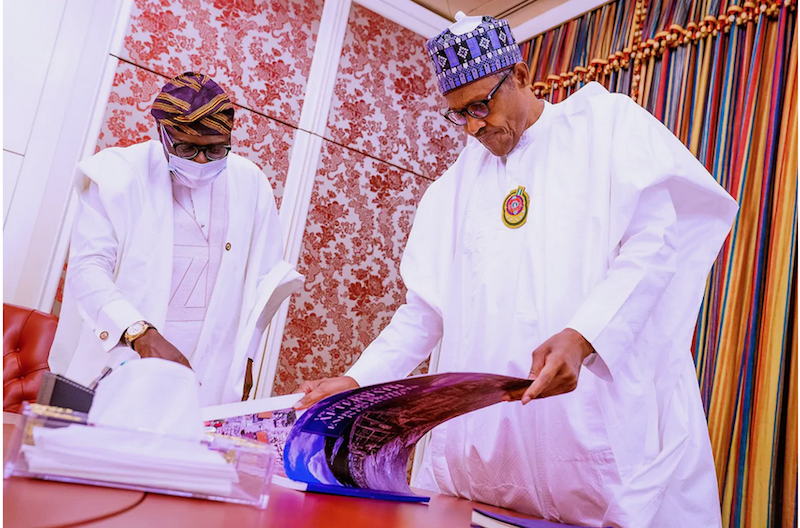