‘She was a committed chorister’, RCCG commiserates with Uwa’s family, demands justice

The RCCG expressed sadness over Uwa’s death saying the church has lost a great member.

The Redeemed Christian Church of God (RCCG) has commiserated with the family of Vera Uwaila Omozuwa, a 22-year-old student, who was attacked and raped in a parish of the church in Edo State.

In a statement signed by Pastor Olaitan Olubiyi, the Head, Media and Public Relations, the church described the deceased as a committed chorister. 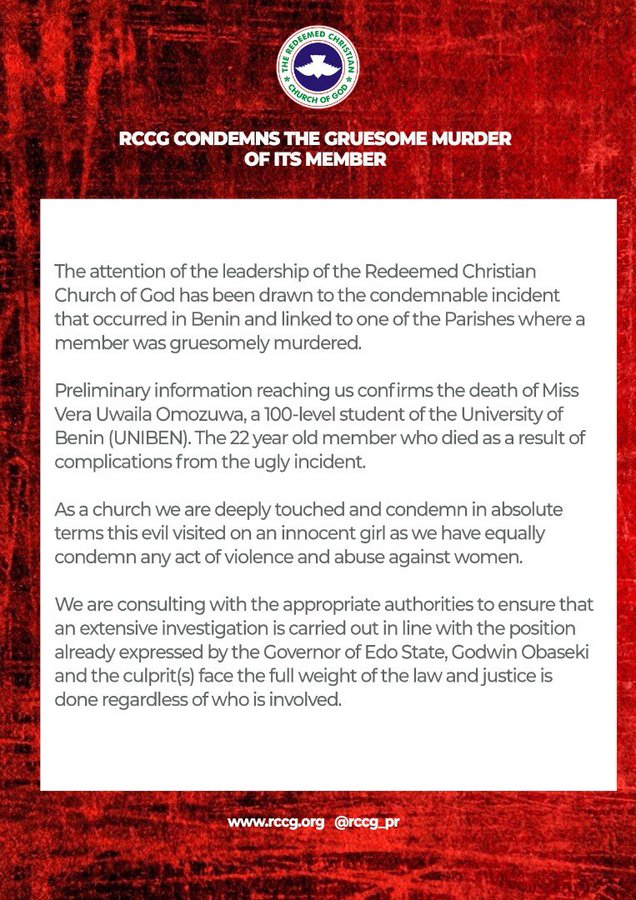 The statement reads in part, “The church wants to commiserate with her family because it is a great loss; somebody has lost a daughter and a promising family member. We are saddened by the occurrence.

“The lady was a member of the choir in one of our parishes and from the report we have, she had been going to collect the key to the church, where she had been having her private study.

“On May 27, she did the same thing and nobody knew what had happened. When the night guard resumed, he found her in a pool of blood, half-naked.

“The parents were called in and the police were informed. She was taken from the University of Benin Teaching Hospital. We learnt that she gave up the ghost last night.

“It is really sad for us because we have lost a great member and we pray the Lord will help the family at this time.”

Meanwhile, Governor Godwin Obaseki of Edo state has ordered the police in the state to identify, arrest and prosecute anyone found culpable in her death.