The APC would zone the presidency to the south in 2023 and Tinubu is as formidable as they come down south.

On the week of March 8-12, as some sections of Obasanjo’s internet buzzed with eulogies for Vice President Yemi Osinbajo who was commemorating his 64th birthday, a top aide of Asiwaju Bola Tinubu put a phone call across to Pulse.

Bourdillon was in panicky mode, he said in between raucous, palpable laughter. Did we think Osinbajo breaking the internet all week was because he is interested in the 2023 presidency? Was this Osinbajo essentially commencing his 2023 presidential campaign?

It says a lot about how Bourdillon thinks and works that since the turn of the year, Tinubu has received more press attention, for good or ill, than perhaps any other politician in the land:

Tinubu recently donated N50 million to victims of a market fire in Katsina, the 12th Bola Tinubu Colloquium will strategically hold in Kano this year, there have been stories in the media of the anti-graft agencies turning on Tinubu for his alleged primitive acquisition of wealth and for his business interests in all facets of Lagos life, and President Buhari has just issued a statement to say he isn’t at war with Tinubu or at odds with his political interests.

You get a feeling these days that with one public appearance after the other, Tinubu is making a pitch to the northern voting bloc and warming his way into the hearts of northern and southern voters.

He’s also been very active on social media, thanks of course to his social media aides and his fawning social media warriors. He’s been more in our faces these days than he’s been since 2015.

He’s also been consulting widely and engaging in talks with relevant stakeholders. His Bourdillon address in upmarket Lagos is often a beehive of activities.

In 2020, after it was reported that Tinubu has purchased a campaign office in the nation’s capital city of Abuja, his media office rushed to put out a statement.

“He has not even declared his intention to contest the 2023 presidential election let alone opening a campaign office,” said Tinubu spokesperson Tunde Rahman.

“Tinubu has also repeatedly said 2023 is still some years away and that he is at present focused on helping President Buhari to deliver on his mandate as he is doing and coast home to victory,” Rahman added.

Well, 2023 is no longer “some years away” and the Tinubu political think-tank has since cracked to life. The man has also never categorically denied that he wants to be president. 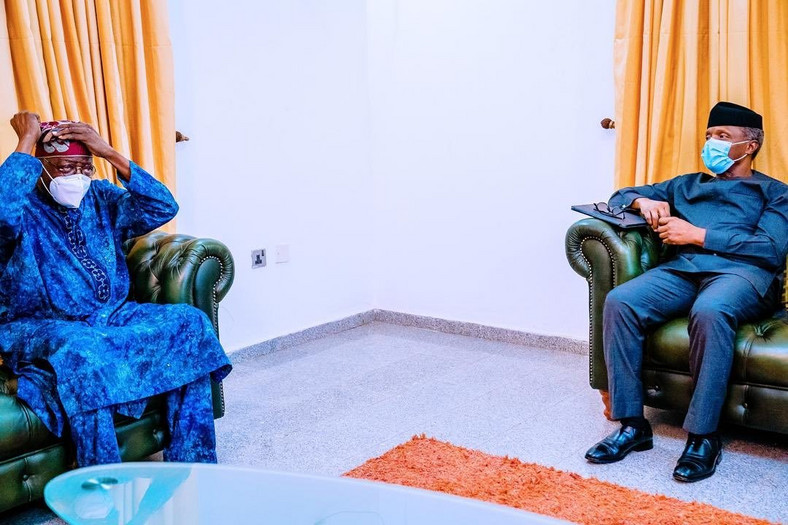 Of course the APC would be zoning the presidency to the south and there’s the small matter of whether Osinbajo is interested in succeeding Buhari.

The vice president’s aides also continue to issue those bare-bone lines of “it’s too early in the day, the vice president is currently interested in supporting the president to fulfill his campaign promises to Nigerians..yada…yada..yada.”

However, you can be sure that if Tinubu is even remotely interested in the presidency, Osinbajo would defer to and support him.

Circa 2014, Tinubu was interested in being Buhari’s running mate ahead of the 2015 presidential contest. He retained the right of first refusal at the time after being instrumental to the formation of the APC as we know it today.

It took a superior ‘no Muslim-Muslim ticket because Nigeria wasn’t ready for it’ argument for Tinubu to cede that right to Osinbajo, his protégé.

As the Jagaban painstakingly sets out his stall for a presidential run in 2023, he definitely thinks the APC owes him one.

Tinubu would be 70 in 2023. He’s been a senator and governor. He considers the nation’s presidency the last feather he’s got to acquire for what has been an illustrious political cap.

*Pulse Editor’s Opinion is the viewpoint of an Editor at Pulse. It does not represent the opinion of the Organisation Pulse.